Shadow of the Father

Yilon is a young fox noble who's just come of age, in the city of Divalia, capital of Tephos. But apart from his best friend and sometime lover Sinch, he doesn't like much about living there. He only met his father, Volle, two years ago, when he left his mother and the city where he grew up. He would give anything to be allowed to leave Divalia.

Or so he thinks. When a stranger arrives with a message that the Lord of Dewanne has died and appointed Yilon his heir, the young fox realizes that there are worse places than Divalia. Dewanne is one of the most remote cities in Tephos, where foxes rule, and mice are relegated to menial jobs and a slum outside the main city. Which makes it difficult for Yilon to explain why his companion is a mouse.

Ever the schemer, Yilon hatches a plan to get sent home, but soon finds that even in a backwards town, there are complicated politics, ancient blood feuds, and family betrayals, old wounds that his clumsy steps have reopened. There are at least two different groups trying to kill him, and the foxes who might help him are the very ones he's done his best to alienate. Without Sinch, who's run afoul of a band of thieves in the slums and has his own death threats to deal with, Yilon will need all the stubbornness and cleverness he's inherited from his father just to survive to the next sunrise, let alone save his inheritance, his friend, and his own hide.

Special preview: Yilon's Journal
Yilon was raised with his mother in the southern province of Vinton. Two years before "Shadow of the Father" begins, he is sent to Divalia, the center of the kingdom, to live with his father and receive instruction on becoming a noble. Read his journal of those two years, posted weekly at yilon.livejournal.com, which concluded in January 2010. 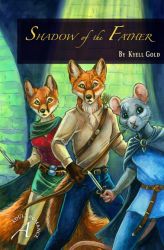