We've gone to the dogs! In Heat, Volume #14, we offer another round of the finest furry erotica available, but this year we ended up with lots of dogs - more than even we expected to have.

In Those Magnificent Women in Their Flying Machines (by Dark End, illustrated by SophieCabra), it's the middle of World War II and opportunities for female pilots are few and far between. After Alexa's attempt to join the fight against the Luftwaffe is cruelly rejected, she seeks solace in a club where an unexpected visitor is waiting for her.

When your best friends are in an interspecies relationship, helping them to conceive could be great fun or it could be a lesson in How to Ruin a Friendship (a comic by Kyell Gold, illustrated by Donryu).

Chase and Kel's marriage was always a little rocky, but he never expected a simple conversation about the possibility of having pups to explode into a fight so quickly. Now he knows that if if their marriage is to last, he needs to make a change and fix their Bad Connection (by Crimson Ruari, illustrated by Merystic).

In Instincts (a poem by Tempe O'Kun, illustrated by DarkNatasha), a feline learns that while deliberation and consideration have their place in love, sometimes one must give in to the baser needs.

To seek closure from his former lover, Alex rides cross-country, heading due West (by Slip-Wolf, illustrated by Sabretoothed Ermine). But it's not long before he is shadowed by a biker gang full of canines and its leader, a strange corgi who can read him like a book.

Some poetry is serious. Some poetry is sad. But when Three Foxes Walk Into a Bar (a poem by Thurston Howl, illustrated by Kadath), do you think anything like that is really going to happen?

In Flame Above the Waves (a comic by Kyma and Zeigler), Timothy Cobb's solitary life tending a distant lighthouse is shattered when the survivor of a pirate attack washes up on his front door.

In a world full of clones, being the original conveys unquestioned authority and power. So why does Markus Broder (the original) feel the urge to obey? So begins the Shell Game (by Kandrel, illustrated by Alastair Wildfire).

When the days are hot and the water is cool, maybe it's time to take a Full Dip (a comic by Ishaway).

Lives change. Relationships change. Sometimes even roles change. One might even go from Top to Bottom (a poem by Mog Moogle, illustrated by Oouna).

In Blue Collar Blues (by Whyte Yoté, illustrated by Alpha0), Jimbo and Hank have a good, steady job, a big, loving family, a peaceful suburban life, and a secret history neither one of them is ready to admit to.

Many myths are packed full of eroticism, but in Tied (a poem illustrated by CadmiumTea), Televassi suggests that perhaps we have missed the subtext of the legend of Fenrir.

In To the Victor the Spoils (by Ocean Tigrox, illustrated by ShinigamiGirl), Coltrane has trained his whole life for one race that will win him the hand of the lovely Rainee and free him from his father's iron rule. But the closer he gets to the finish line, the less the world resembles what he was prepared for.

This year's Afterglow Husky is provided by KourArt, and the wrap-around cover features art from Nomax, inspired by West. 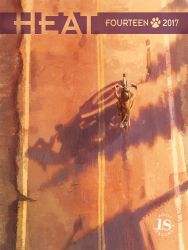