The playoffs are here, and Dev Miski's life has never been busier. If the Chevali Firebirds want to win their first championship, he'll need to play the best football of his life. But, as the only gay professional football player, he's beset by distracting demands for commercials and interviews.

The number one distraction, though, is his boyfriend Lee. After the fox's mother joins a religious anti-gay group, Lee turns back to the gay activism of his college days. He pushes Dev to use his celebrity to reach out to gay youth, but only succeeds in starting bigger arguments. When their relationship faces its most difficult test, will their love for each other triumph?

This is the fourth volume of Dev and Lee's story which began in Out of Position and continued in Isolation Play and Divisions. The playoffs will bring the football season to an end one way or another. What will it mean for their future together?

This is the softcover edition.
Cover and interior illustrations are by Blotch. 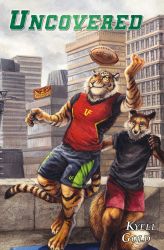